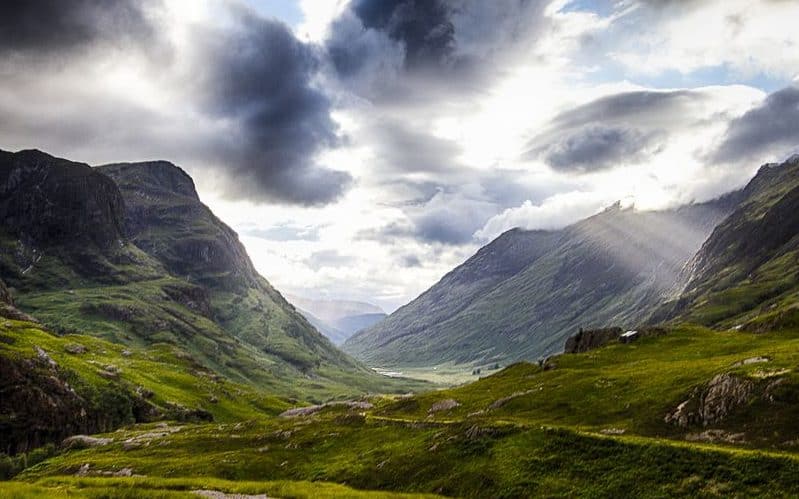 In Scotland we are lucky to have a wide array of hobbies and interests to partake in that appeal to a diverse range of individuals. In this article we have listed, just, a few activities that may appeal to you.

Stirling Castle was the key to the kingdom of Scotland, dominating a vast volcanic rock above the river Forth at the meeting point between Lowlands and Highlands. Its origins are ancient and over the centuries it grew into a a powerful stronghold before becoming the great royal residence that you see today. During the Scottish Wars of Independence which saw Scotland fight for its right to become a free nation from England – the castle changed hands 8 times in 50 years. It was the childhood home to one of the most famous people in Scottish and British history such as Mary queen of Scots,James the VI and I. The castle served as the final frontier to the Scottish Victory. As the English rushed to stop King Robert the Bruce from capturing the castle they met at the nearby region of Bannockburn. Despite being heavily outnumbered the military tactics of King Robert paid off as he defeated the English Army and took the castle, thus awarding Scotland its status as an independent nation split from English rule.

Edinburgh Castle is a fortress which sits upon the formidable looking Castle Rock and provides a fascinating venue to spend a number of hours exploring. The location of this fortification was selected for its strategic advantage and offers an impressive vantage point for views across Edinburgh, The Firth of Forth and beyond. The castle stands at the highest point within the city and dominates the Edinburgh Skyline.

Eilean Donan Castle is situated on the island of Donan at the point where three great sea lochs meet, and surrounded by some of the most majestic scenery found around any castle in Scotland. With a backdrop such as this it is little wonder that the castle is now one of the most visited and important attractions in the Scottish Highlands. This follows the trend of the castle continuously being voted “The Most Beautiful Castle in Scotland”. Initially constructed as a monastery the castle’s roots can be traced back to the 6th century before being, originally, made a strong hold in the 13th Century. The castle was partially destroyed during the Jacobite uprising of 1715. In 1911 it was then rebuilt and restored which took twenty years to complete. The castle’s purpose was, from here on, a residence for the McRae Family until it was handed over to the people of Scotland as a tourist attraction. Eilean Donan is still under the ownership of the McRae family to this day and offers a fascinating insight into castle life through the centuries in the Scottish Highlands.

Scotland is well known for its Aqua Vitae (Water of Life) or as we call it today whisky. While there are so many distilleries to choose from we have selected 3 distilleries which showcase Scotch from past, present and the industry’s future.

Benromach is one of the smallest distilleries and is located on the outskirts of the ancient market town of Forres.  Just two experienced distillers passionately hand-craft Benromach’s unique single malt using the finest Scottish barley and the purest spring water from the nearby Romach Hills. Benromach gives a fantastic opportunity to witness the production of whisky on a small, boutique view.

The Macallan is a name heard throughout the world. This signature Speyside whisky has grown to unforeseen standards, as seen with the resent £20 million investment into their new visitors centre. Despite this glimpse of whisky future; Macallan insist upon the exclusive use of the traditional “Golden Promise” barley, and the maturing of the whisky in specially procured Sherry casks. Depending on the time of year, the access road to the distillery will be surrounded by fields of Golden Promise Barley. The Macallan Estate is a must see for any whisky aficionado as, quite frankly, there is nothing else like it.

Located at the head of Loch Laphroaig on the south coast of Islay, Laphroaig Distillery was established in 1825 and is renowned for the rich, unmistakable taste of its whisky which is the favourite of His Royal Highness the Prince of Wales and even bares his Royal Warrant. Traditional methods are still used in order to get produce the most distinctive whisky. Laphroaig is one of the largest brand names on Islay and is certainly a must visit if you find yourself on the island.

Scotland has long been known as “The Home of Golf” with 5 (Muirfield, The Old Course, Carnoustie, Royal Troon & The Aisla at Trump Turnberry) of the 10 golf courses on the British Open roster located on Scottish soil. Out with these famous courses there are also a further 7 courses listed within the top 100 courses in the world (Royal Dornoch, Kingsbarns, North Berwick, Castle Stuart, Royal Aberdeen, Trump International Aberdeen & Cruden Bay). This results in 13% of the worlds top courses residing here, in a country with a land mass of just under 40,000 mi², it is no wonder that Scotland is often referred to as “The Mecca of Golf

The North Coast 500 (NC500) has been voted one of the world’s top coastal touring route. Bringing together more than 500 miles of stunning coastal scenery, the North Coast 500 naturally follows the rugged coastal edges of the North Highlands – one of Scotland’s best-kept secrets. The North Coast 500 is so much more than just a driving route; it’s all about the journey and the experiences you’ll enjoy along the way. “Scotland’s answer to Route 66” will provide you with a journey on the road less travelled in true wilderness. In this region of Scotland villages are a few houses and infrastructure can be few and far between. This area only appreciated the installation of electricity in 2005 and allows you to take a step back in time into traditional highland Scotland.

The road through Glencoe takes you through the heart of an ancient volcano. Follow the Glencoe Geotrail to find out more about how glaciers and fiery explosions carved out the glen’s rugged mountain peaks. Glencoe is one of the most beautiful and other-worldly places in Scotland. It’s even featured in films such as James Bond’s Skyfall and several Harry Potter movies. The glen does have a dark history, however, being the site where the McDonald’s of Glencoe met their gruesome end in 1692 during the Glencoe massacre. Some say that when traversing through this echo filled glen you can still hear the screams of the clan from that fateful day.

Hiking in Loch Lomond & The Trossachs National Park consists of a delightful landscape of forests, lochs, peaks and glens that have lead to the area becoming known as “Scotland in miniature”. The variety of terrain within this region results in many hiking routes which cater to avid trekkers of all levels of experience and ability, from easy rambles for the family, through longer, strenous hikes to ascents of the major Munros.

The river spey is a goldmine when it comes to fishing for salmon. In addition the beautiful scenery in the area and famous whisky distilleries which can only enhance the experience. It is one of Scotland’s big four rivers and anglers come from all over the world to fish here, many wanting to visit the home of the famous ‘Spey cast’. The River Spey has consecutively been named as the best fishing river in Europe and serves as a peaceful fishing experience. Lang Atholl Experience provide Ghillies who only enhance your experience, providing local knowledge of the river and a nice dram to warm your bones.

The Gleneagles Resort provides many activities in the county of Perthshire. From Golf to Spa Breaks this majestic 5 star resort is regularly listed as one of the finest in the world. Within the resort The Gleneagles Shooting School is set on a spectacular grouse moor and teaches a range of shooting disciplines. The Clay Target Shooting to a Long Range Rifle area the layout has been developed over the past 20 years into the world-class facility it is today.

For those who prefer a more relaxed approach there are a wide range of World Class spa hotels located throughout Scotland. From The Balmoral’s Rocco Forte Wellness Centre located at the prestigious address of Number 1 Princes Street to The Isle of Eriska Hotel & Spa located on its own private island on Scotland’s rugged Western Coast. You will be spoilt for choice when finding your inner tranquility.