This package celebrates the icons of Scottish fiction and prose.
You’ll stay in the hotel where Orwell penned 1984 and Rowling wrote The Deathly Hallows, then visit The Mound, which is widely credited inspiration behind Dr Jeckyll and Mr Hyde – And that’s only the first day.

You have the choice of two hotels within Edinburgh both of which have a literary theme.

The 4 star, The Place, is located in the affluent area of York Place. A luxury four star boutique hotel, situated in a stunning A-listed Georgian Terrace on York Place, in the very heart of Edinburgh city centre.  This privately owned Edinburgh hotel features 47 stylish bedrooms & suites, a stylish restaurant & bar.  The hotel is where George Orwell wrote 1984 which lands The Place within the archives of literacy history. Along the street from the hotel is Picardy Place, the street on which Sir Arthur Conan Doyle was born. Here you will find a statue, in his memory, of his greatest literary creation – Sherlock Holmes.

The Balmoral Hotel, which has been named as the best hotel in the UK and Ireland for 2019 has, for over a century, found a home at Edinburgh’s most prestigious address, No. 1 Princes Street. A landmark in the centre of the city, the historic building’s grand clock still dominates the skyline, while its enviable location, stunning views, warm hospitality and world-class facilities provide the perfect retreat. Enjoy dinner in our Michelin-starred Number One restaurant, unwind in our award-winning spa and enjoy views of Edinburgh Castle. The Balmoral holds a fantastic location to explore the city located the edge of the cities New and Old towns. It is not far from here at the Mound where it is believed that Robert Louis Stevenson first came up with the idea for The Strange Case of Dr Jekyll and Mr Hyde. It is believe that he disliked the new age architecture fitting so closely to the ancient old town that this was the first spark that drove him to create the monstrous character of Mr Hyde. Within the Balmoral Hotel, we do have the J.K Rowling Suite which was presented to the author for her to find solidarity to write Harry Potter and The Deathly Hallows.

In the evening (20pax needed) you will be lead to the wonderful Signet Library where you will have a private welcome dinner. The Signet Library is home to the Society of Writers to Her Majesty’s Signet – WS Society for short. The Society goes back to the 15th century as the officers authorised to produce royal manuscripts with the King of Scotland’s seal, ‘the Signet’.

(Less than 20pax) You will dine within the Scotch Malt Whisky Society within their beautiful Georgian venue in Edinburgh’s New Town. Here you will enjoy a 2 AA Rosette, 5 course tasting menu with a paired whisky or glass of wine with each course. 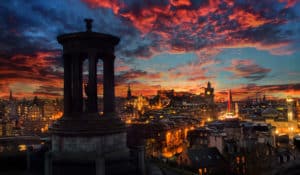 This tour sees you guided through the historic city, following in the footsteps of some of the world’s most famous authors.

JK Rowling: The Elephant House, where much of the early Harry Potter books where written | Victoria Street –  The inspiration for Diagon Alley. | Greyfrairs Kirk, where some famous Harry Potter characters got their names.

The home where Stevenson grew up.
Deacon Brodie’s Tavern, Named for the well respected socialite who lived a double life as a serial killer, inspiring Dr Jekyll.

Scott’s Monument, situated on Edinburgh’s Princes Street this is the tallest monument to an author in Europe. Along with this we will visit the plaque of remembrance for Scott within Princes St Gardens.

Picardy Place, Doyle’s birthplace. Today, there stands a Sherlock Holmes statue which was erected in his honour.

The Royal College of Surgeons, where there is a hand written letter by Doyle to his lecturer Dr Joseph Bell siting the doctor as his inspiration for Sherlock Holmes.

Once you have taken this tour your guide will lead you to the Edinburgh Writer’s Museum. Home to portraits, rare books and personal objects including Burns’ writing desk, the printing press on which Scott’s Waverley Novels were first produced, and the rocking horse he used as a child. On display are Robert Louis Stevenson’s riding boots and the ring given to him by a Samoan chief, engraved with the name ‘Tusitala’, meaning ‘teller of tales’. There is also a plaster cast of Robert Burns’ skull, one of only three ever made.

After a long day you will be taken back to your hotel where you will spend your final evening in this ancient city.

Your Lang Atholl Driver and Guide will be on hand to greet you in the lobby of your chosen accommodation on the morning of Day 3.

You will begin your day travelling south from Edinburgh, into the Scottish Borders. Here you will find Abbotsford House, Home of Sir Walter Scott – the 19th century novelist who popularised tartan, saved the Scottish banknote and rediscovered his country’s Crown Jewels. Discover a treasure trove of intriguing items which inspired his greatest poems and novels. Get an exclusive insider view into the life that made the man.

From Abbotsford House you will make the short journey to Traquair House, Scotland’s oldest inhabited house dating back to the 1100’s. The house here is home to the Stuart family, who went on to become Kings and Queens of Scotland. In Sir Walter Scott’s Novel, the Waverley, he mentions the Traquair House gates flanked by two stone Bears. It was also Sir Walter Scott who perpetuated the story that the gates would not be re-opened until a Stuart was returned to the throne.

From Traquair you will travel north to the ancient town of Stirling, a wee city with a big history, Stirling punches well above its weight for historic attractions and spectacular scenery. You will weave past historic venues such as the Wallace Monument, before making a stop at Stirling Castle. Stirling Castle is one of Scotland’s most historically important sites and was once a favoured residence of the Stewart kings and queens who held grand celebrations at the castle. You will be swept back to 16th century life on your tour meeting costumed characters in the roles of bodyguards, court officials, maids of honour and servants.

From Stirling Castle you will travel north to the picturesque town of Pitlochry where you will spend the night in the beautiful Fonab Castle Hotel. The hotel is nestled in the heart of Highland Perthshire and is a truly unique five star hotel. Lovingly restored, it draws inspiration from its historic past and breath-taking surroundings whilst adding the odd contemporary twist. It really is anything but ordinary. 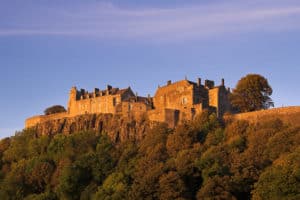 You will depart Pitlochry travelling east to the town of Kerriemuir, where you will find JM Barrie’s Birthplace. The creator of Peter Pan, he spent his childhood in this small cottage, and it’s here that you can see traces of the creative spirit he was set to become. The son of a weaver, Barrie lived with his seven brothers and sisters in two upstairs rooms, while his father’s weaving workshop was downstairs. The washhouse in the yard was Barrie’s first theatre – and may even have inspired the Wendy house in Peter Pan.

An exhibition tells the story of his life and work, and includes the writing desk from Barrie’s London flat where he penned Peter Pan.

From Kerriemuir, you will travel to the beautiful Glamis Castle, a living, breathing monument to Scottish heritage, hospitality and enjoyment for all. The family home of the Earls of Strathmore and Kinghorne, Glamis Castle is the legendary setting for Shakespeare’s Macbeth, the childhood home of HM Queen Elizabeth, The Queen Mother and the birthplace of Princess Margaret.

You will travel from Pitlochry, North West along the banks of Loch Lochy and on to the town of Dornie where you will find Eilean Donan Castle. Eilean Donan Castle is regarded as one of the most beautiful castles in Scotland. Out-with,  Edinburgh this is the most photographed monument in Scotland. Located on the Eilean (island) of Donan, overlooking the Isle of Skye, at the point of confluence of three great sea-lochs (and surrounded by the majestic splendour of the forested mountains of Kintail. This 12th century castle holds a deep, rich history along with a setting that is truly breath-taking.

From the town of Dornie, you will make the short journey onto the Isle of Skye via the Skye Bridge. You will travel to your accommodation for the evening, Duisdale House. Enjoy a unique highland getaway at the chic and elegant Duisdale House Hotel on the Isle of Skye. Situated on the Sleat peninsula at the South tip of Skye, you will be rewarded with breathtaking views and peaceful, picturesque gardens at this luxurious, contemporary retreat.

Built-in 1865 as a Hunting Lodge, Duisdale House was given a new lease of life when it was taken over by Anne Gunn, who have delivered an immaculate, stylish boutique hotel, where guests are offered the absolute highest level of service.

You will travel from Duisdale House to the “capital” of the island, Portree. Which comes from the Gaelic ‘Port Righ’ meaning royal port after a visit by King James V of Scotland in 1540.

From Portree you will depart Skye, travelling east through the northern reaches of the Scottish Highlands where you will witness some spectacular scenery as you travel to Inverness.

Upon reaching Inverness, The Capital of the Highlands you will take a brief drive through the town learning of its history. You will then reach the nearby, eerie, Culloden Battlefield. Here on the 16th of April 1746, the Jacobite Uprising met its gory end; with the British Forces surrounding the Jacobites within the marshland of Culloden Moor.

On this site an estimated 1,100 men were slaughtered where they stood and not only was this the end to the Stuart’s Claim to the British Throne it began the downfall of the highlander’s way of life. There are many stories written of this famous, yet tragic, time in Scottish history. Of note we have Sir Walter Scott’s Waverley and Diana Gabaldon’s Outlander Series.

From your tour of Culloden you will make your journey into the Cairngorms National Park and the heart of “Whisky Country” and the town of Aberlour. Here you will find Dowan’s Hotel, Situated in the town of Aberlour, the hotel is the ideal base from where you can explore Speyside and everything it has to offer.

Your Lang Atholl representative will meet you for the final time in the lobby of your hotel and transport you to Edinburgh Airport with time for a leisurely departure.

This, sadly, is where we must say our goodbyes and we send you on your onward journeys with memories of a Scottish experience that will last a lifetime.